Yew or Monks Walk planted along an old road that served as a pilgrims route from the abbey at Kilmacurragh to Glendalough. 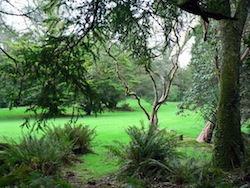 The first evidence of buildings at Kilmacurragh formed part of a monastic community founded by Saint Mochorog, a Breton of royal birth, who established a hermitage here in the early 7th century (his feast day is December 23rd).

This abbey survived to the early 16th century, The monastery orchard (on the site of the present walled garden) was still extant in 1708 and appears on an estate map dating from that time.

The foundations of the old abbey still exist and lie beneath the present Chinese garden east of the Pond Vista. 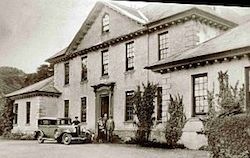 The Actons had by this time arrived. They had the old abbey buildings torn down in 1697 and from the stone salvaged, built a fine, perfectly proportioned Queen Anne house to the design of the noted architect, Sir William Robinson (1643-1712), whose best-known work is the Royal Hospital Kilmainham.

The Actons also began planting including a two-mile long beech avenue and thousands of foreign plants,trees and shrubs.

The Yew walk or the Monks Walk was planted at this time along an old road that served in earlier times as a pilgrims route from the abbey at Kilmacurragh to nearby Glendalough.

Assaulted by Color and Scents!

Later during the 19th Century the gardens were further expanded with the advice of the Director of the Botanic Gardens in Dublin, David Moore and his son Sir Frederick Moore.

The different soil and climatic conditions at Kilmacurragh resulted in many of these specimens succeeding there while struggling or failing at the Botanic Gardens in Glasnevin. Kilmacurragh is particularly famous for its conifers and rhododendron collections.

Specific garden areas have been devoted to the floras of various regions of the world, for example, temperate South America, the Himalaya, China and perhaps most importantly, to our own Irish flora. 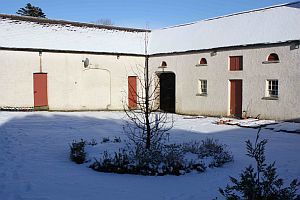 The arboretum is now being replanted by the National Botanic Gardens, Glasnevin.

New important projects include the ecological restoration of native woodland and grassland ecosystems and the establishment of a genetic collection of native tree species.

Staff at Kilmacurragh have already began gathering a genetic oak collection for Kilmacurraghs woodlands by the main estate gates and for the proposed David Moore Reserve to the east of the main arboretum. A Tea rooom for visitors is also planned.

For more details about visting times etc Visit their Website